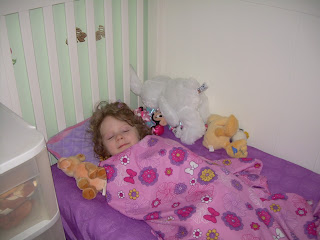 This morning I returned from a church women's breakfast to the sound of busy chatter over the baby monitor.  With our two teens away for the weekend, I knew that Hubby and Cupcake were up to something in her room, especially after I heard him instruct her to put the hammer away!  As I climbed the stairs I saw the unmistakable signs of change in the hallway - cardboard boxes lying in front of a familiar white railing.  With quickened step, I soon found myself standing in her room.  Furniture re-arranged.  Crib gone.  Pretty little toddler bed in its place.  Excitement etched on their faces as I entered the room and...cried.

Flooded by emotions, I continued to cry.  We had talked about this day for awhile now, but I had been reluctant to make the move.  Apparently, this had been the perfect weekend for Hubby to tackle the task, so he thought he would go ahead and surprise me by having it all done by the time I got home.  Silly man.  After 20 years, he forgot he was married to an emotional, sentimental old fool of a woman!

Cupcake attempted to console me with, "Oh, it's okay, don't cwy Mama!", flitting back and forth between me and her newly converted bed.  Meanwhile, Hubby and I both just stood there, equally stunned.  He at my tears and me at what I can only describe as a huge lack of insensitivity on his part!  C'mon, what had he been thinking?!  Didn't he realize that I had wanted before and after pictures?  To rock her one last time before putting her to bed in her crib?  To savor the moment, watching her sleep surrounded by every Minnie Mouse she could find?  To wake up hearing her call me to get her out of  her "cwib?"

I tried to calm myself and enjoy Cupcake's enthusiasm, but I eventually had to excuse myself to go sob like a baby in the privacy of my own bathroom.  Again, flooded by emotions only this time with a new theme overcoming me: fear.  How will I ever be able to sleep again, knowing she can wander around the house on her own?  With no safe spot to stow her, when will I be able to get a shower or have a break from the inevitable temper tantrum?  Will she ever take another nap?  How will she be safe in a room she shares with her teen sister?  Now that she has full accessibility to the tall bookshelf, how soon can we bolt it to the wall?  What if...? What if...? What if...?

As nap time approached, I apprehensively got her ready to try out her new bed.  Anxiety filled me as I anticipated an hour long wrestling match attempting to keep her in the bed.  I recalled these years with her older siblings.  The daily nap time struggle which entailed having to sit threateningly at the edge of their bed until they fell asleep or learned to play quietly on their beds.

Frankly, I was exhausted and my emotions were raw (hence, the crying!) after an extremely busy week (which had brought the first full week of school, the first day of nursery school, the kick off to two ministries, piano lessons, auditions, back to school night and more.)  I ached for the nostalgia of our night time routine which I had missed over the past two days due to our hectic schedule necessitating babysitters.  The week had been a whirlwind and I really did not have it in me to fight her to take a nap.

Cupcake climbed in her big girl bed and I marveled at how she could just jump on in without me wrenching my back lifting her over the high crib rail.  I tucked her in, relishing the fact that I could now easily reach her for a cuddle and a kiss.  Thankfully, she snuggled down with her stuffed animals and quickly fell asleep...likely exhausted from the excitement of the day (not to mention the intense mood swings of her Mama!)

Change is hard, especially when it means leaving a part of  life behind.  I suppose if my mid-life crisis is melting down at the sight of a toddler bed in place of the crib, then I'm doin' pretty well!

As soon as Hubby and Cupcake wake up from their respective naps, I'll be sure to greet them with a more thankful heart!
Posted by Mid-Life Mother at 3:53 PM