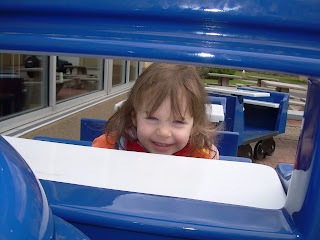 Recently, Cupcake and I took our first solo long-distance road trip, traversing nearly the entire length of Pennsylvania along Route 80.   Yes, call me crazy, but I braved the road with a two and a half year old...by myself...and we both survived!  Now, to put that statement into perspective, lets walk the proverbial mile in Hubby's shoes, who graciously allowed me to make this monumental trek with our precious little cargo:

Gee, it's a wonder Hubby lets me out of the house at all?!  You can now imagine the trepidation he must have had letting me take such a long trip on my own with a toddler in tow.  (Good thing he's a prayin' man!)


This trip meant a lot to me, because it was a special opportunity to take a literal trip down memory lane to my Alma Mater, Grove City College, to celebrate Dr. Morledge's 80th birthday!


Dr. Richard A. Morledge, (affectionately known as Dr. RAM to us Chapel Staffers), was Dean of the Chapel during my college years at GCC.  I had the privilege of serving as one of his Chapel Staff for three years.  He was like a father away from home for me during those pivotal young adult years.  It is because of his influence and impact in my life that I wanted to make sure to thank him in person!


It was a wonderful time catching up with old college friends and fellow staffers!  We enjoyed strolling down memory lane and laughing at how different some of us look after twenty years.  Funny the things we remember about each other.  I was reminded that I had cut all of Dr. RAM's chocolates in half because I wanted to know what was inside before eating them.  I informed them that I am now extremely thankful for the box of chocolates that come with maps on the lids!


In addition to former classmates, I was also aware that Mrs. Nancy Paxton would be in attendance, which made making this trip all the more special - the proverbial icing on the birthday cake!


As Dean of Women during my stay at GCC, Mrs. Paxton, was like my mom away from home.  Having been part of several honor societies on campus and a Resident Assistant, I had the opportunity to work closely with and learn from Mrs. Paxton.  I was so glad to have the chance to extend my thanks to her, in person, after 22 years!  I have found myself quoting her very often during the past two decades with my work with teens.  My all time favorite quote of hers, "You will fall in love, you will get married and you will have babies...IN THAT ORDER!"  And she was right...I did!


The other factor that spurred me on to take this trek was the opportunity for Cupcake and I to visit with my best friend from high school and college...for her birthday!  Quite the birthday theme goin' on here!


I prepared myself for a long and grueling ride with Cupcake, when after 10 minutes in the car she kept asking where KitKat's house was. Fortunately, she fell fast asleep and we only stopped once in our 6 hour journey across the state.  Thank you Veggie Tales!

The highlight of Cupcake's trip was her first bus ride!  Mr. BFF happened to have a mini school bus at home, so we loaded up the kids and drove them down the road to the local ice cream joint.  The workers scrambled inside the little store as they anticipated a bus full of teenagers to disembark.  The sigh of relief that swept across their faces was quite evident, not to mention quite humorous, as two tots and a tween climbed off the bus with us!


Our little ladies enjoyed playing together and became fast friends.  We, in turn, enjoyed catching up over yearbooks, laughing about our high school and college crushes, reminiscing over our many years of friendship and sharing stories about our current lives on opposite sides of the state.


The time came for us to part and Cupcake cried for a good 15 minutes as we left the family waving in the driveway.  She fell asleep right away and I thought we might have as easy of a trip as we had on our way out.  Unfortunately, I made two crucial mistakes.

Mistake #1:  An hour into our trip I decided to pull over to get a drink.  Naturally, Cupcake woke up as soon as we exited the highway.  What was I thinking?!  Of course, that was all the nap she had for the next 7 hours.  She did eventually fall asleep for the last hour...whew!

Mistake #2:  I gave her a chocolate covered granola bar when we left.  Again, what was I thinking?!  I thought she had eaten it, but when she awoke from her nap I turned to see her covered in chocolate.  It had melted in her hand resting in her lap and she had smeared it on her face when she woke up!  She was such a mess I had to strip her in the parking lot of McD's.  All that was going through my mind was the quote from the movie Baby Mama, "Is it chocolate or poo?"  Chocolate!


The trip home was rather long, since we had to make several more stops to let my tired tyke get a break from the van.  Eventually, we arrived home after hours of movies and toddler CD's.  Cupcake was not happy to be home.  She was so attached to her new friend, that when we pulled into the driveway she cried to go back to Kit Kat's house!  After a good night's sleep, however, she was ready to get back in the car and embark on another visit to see her new friend.

Despite the longer ride home, it was a fun and memorable road trip for me and Cupcake.  I'd do it again in a heartbeat...only without the chocolate!
Posted by Mid-Life Mother at 3:04 PM