Disney On Ice: Rockin' Ever After! 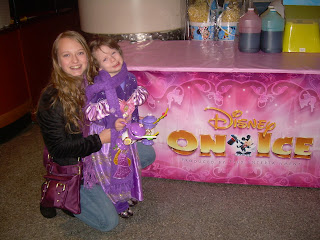 It was a magical evening for me and my girls when we had a wonderful opportunity to see the latest Disney On Ice show, courtesy of my friend, Sarah!  It was the perfect birthday gift for me to get to see the look on Cupcake's face as she sat mesmerized by the magic for her first ever Princess ice show! 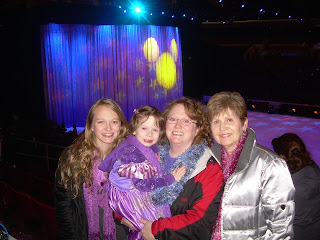 After a quick jaunt into the city, with a surprising lack of traffic, we arrived excitedly at the Wells Fargo Center in Philly.  Greeted with vendor upon vendor overflowing in pinks, purples, sparkles and lights, we wound our way around the entire concourse to our seats in the first section.  Had we been familiar with the center, we could have turned right to go one door from the entrance to find our spot, but as we consisted of three generations of purple clad, Polish Princesses...we managed to go left and walk the entire way 'round!  Amazingly, Cupcake (all decked out from head to toe in every shade of purple with her Rapunzel scarf and shirt) managed to keep up quite well, walking the entire distance herself.  I do believe the hot pink sensory overload from the vendors was an adrenaline shot to my wide-eyed Princess loving preschooler (not to mention my Princess wannabe teenager!) 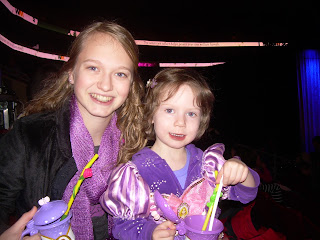 We picked up adorable mugs for the girls, (yes, both of them), overflowing with rainbow snow cones and a cute commemorative bucket full of popcorn, then settled in our seats to watch the show.  We marveled at the perfect spot we had in the last row of the first section off of the ice.  These were amazing seats, allowing us to be close enough to see the expressions on the performer's faces (without cumbersome binoculars) and far away enough that we could see all the action on the ice at once!  We were positioned right in front of the lighting guys who Mom Mom became fast friends with and discovered all sorts of interesting tidbits (42 people in the touring company, 197 lighting cues in the guy's head sitting behind us who hailed from Vermont, and the show will be touring until May...so check out a city near you to get your tickets!)

As the house lights went down and the curtain went up, I watched Cupcake as she sat clutching her new purple Rapunzel mug full of rainbow ice chips, utterly enthralled with the appearance of Mickey, Minnie, Goofy and Donald!  They kicked off the evening, linking stories and characters together with their "talent show."  Pinocchio and the Ugly Step Sisters provided a couple comedy acts before the ice was transformed into an under the sea adventure with the story of Ariel! 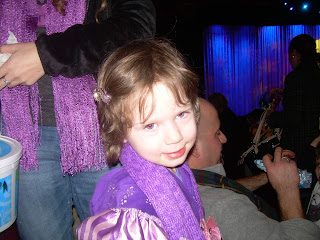 The costuming was beautiful as sea creatures, fish and mermaids danced and twirled on the ice!  The highlight of Ariel's story was when she was pulled high into the air above the ice and performed breathtaking high-ropes acrobatics!  There were audible gasps from me and other onlookers as we watched her execute some amazing stunts.

As we waved farewell to Ariel and Prince Eric, Cupcake turned to me, smiling, and asked, "Who's next?!"  She was not at all disappointed when her favorite Disney Princess of all, Rapunzel, took to the ice.  While Cupcake was thrilled to see her purple adorned Princess, I marveled at the life size horse, Maximus, who entertained the crowd as he chased after Flynn Rider!

After a brief intermission, we were transported to ancient Scotland with the Celtic sounds and choreography of the story of Merida from Brave!  Having seen Maximus take to the ice, I was only slightly disappointed that this section contained no skating bears!  The muscle suits of the various Scottish suitors and the cute puppets portraying the triplet terrors added to the humor of this story.  The ending seemed rather abrupt when Mickey Mouse just summed up the story in a sentence or two - so perhaps they were trying to avoid the dancing bear.

The last of the four Disney Princesses to emerge from behind the big velvet curtain was Belle!  All our favorite characters from the enchanted castle welcomed Belle as they bid her to "Be Our Guest!"  The egomaniac, Gaston (along with his faithful sidekick, LeFou, and the trio of blonds) provided much comedy and fun filled skating sequences.  The final clash between Gaston and The Beast, ended with a bang, flash of smoke and the appearance of the handsome prince who whisked Belle off to skate to their signature song.  It was a fitting finale!

All the Princesses and characters appeared on the ice for the grand finale.  It was a cavalcade of fancy foot work, lifts, costumes and choreography that continued to amaze us up to the final bow!  Mom Mom and I not only enjoyed the show, but cherished watching Darlin' and Cupcake completely enthralled with magic of it all.

In my humble opinion, you're never too old to love Disney Princesses!  Darlin' proved that point to me quite well throughout the night as she sat next to Cupcake, equally mesmerized.  At one point she turned to tell me that it was so wonderful it was giving her chills (never mind the snow cone or arena of ice!)  I also got a kick out of seeing both girls quietly singing along with Ariel during one of their favorite songs, "Part of Your World."  Yup, Cupcake knows all the words.

I highly recommend taking your family to become part of that magical world of Disney On Ice.  It will be an evening to remember.  It will entertain Princesses of all ages, as well as Kings, Queens and Princes alike!  There is plenty of action and adventure to keep the attention of sons (and husbands, too!)

May you enjoy your Rockin' Ever After...I know we sure did!
Posted by Mid-Life Mother at 5:07 PM